The Texts of Frankenstein

This is summarised from Charles E. Robinson, “Texts in Search of an Editor” in the Norton Critical Edition of Frankenstein edited by J. Paul Hunter (pp. 202-204). As he says it “should help dispel the still-persistent myth of the solitary artist who has total control over a text.

Elsewhere on this site I have listed the major changes that Mary Shelley made to the original published text of Frankenstein (1818) when she reissued it in 1831. On this page I am going to list changes to the original draft (1816/17) made by Percy Bysshe Shelley (who married Mary Wollstonecraft Godwin on 30 December 1816) to the original draft. I am not going to list all of them: merely the most significant of those that actually made it through to the 1818 publication. Shelley made several thousand amendments to the handwritten manuscript that Mary Shelley produced. Most of these were purely editorial (corrections of punctuation and spelling); many were simply one-word changes (which I am mostly not listing), but others were more significant. They are not enough, in my opinion, to warrant saying that P. B. Shelley was a “co-author” of M. W. Shelley’s book, as some have done; the amendments are no more than a modern editor might made to an author’s text, and we do not expect the publisher to add the editor’s name to the author’s on the title-page.

I do not believe that there is a list of these amendments anywhere. As my source I have used Charles E. Robinson, ed., Frankenstein, or The Modern Prometheus. The Original Two-Volume Novel of 1816-1817 from the Bodleian Library Manuscripts by Mary Wollstonecraft Shelley (with Percy Bysshe Shelley) (New York: Vintage Books, 2008). This book prints the amended text, with P. B. Shelley’s changes indicated by italicisation, and then prints M. W. Shelley’s original text (which only survives from a point in chapter 1, thus leaving out Captain Walton’s letters at the beginning).

I have not listed the corrections of punctuation and spelling; although I do 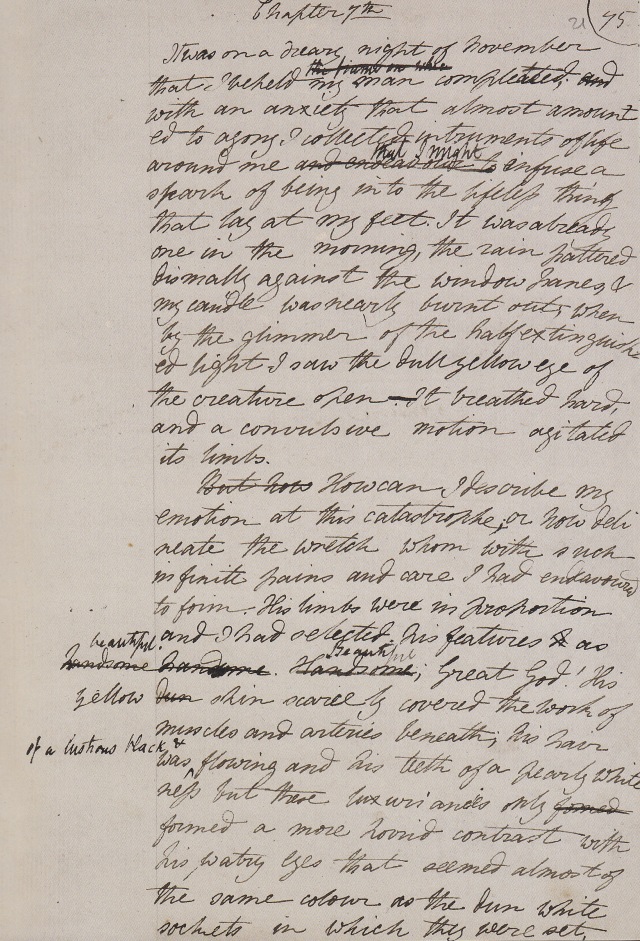 sometimes list changes in words, if only to illustrate that PBS turned MWS’s plainer text into something more opaque, replete with complex (often Latinate) words, although occasionally clarifying things where MWS had not been specific enough. The chapter numbers I give are from the three-volume 1818 edition, rather than from the two volumes projected in the 1816/17 manuscript.

This illustration shows how the manuscript appeared, with a broad margin in which either Shelley could make changes. This page comes from the beginning of Chapter 7, with the description of the creation of the Creature. Charles Robinson has learned how to distinguish the hands of the two Shelleys. Thus, the Creature’s skin was originally described as “dun”, but Mary has changed that to “yellow”. On the other hand, it is Percy who has changed the repeated words “handsome” to “beautiful” and has added “of a lustrous black” to Mary’s description of the Creature’s hair as merely “flowing”.

It would be useful to list here some of the small corrections made by PBS, which I summarise from Anne K. Mellor’s “Choosing a Text of Frankenstein to Teach”, from the Norton Edition (as above), pp. 208-209:

caused → derive their origin from

a painting →  a representation

ghost-story → a tale of superstition

about on a par → of nearly equal interest and utility

eyes were shut to → eyes were insensible to

it was a long time → a considerable period elapsed

what to say → what manner to commence the interview.

And so on… no commentary is necessary.

13. Between “he smiled at the names of Cornelius Agrippa and Paracelsus, but without the contempt that Mr Krempe had exhibited” and “that his lecture had removed my prejudices concerning modern chemists”, PBS added the following: “He said, that ‘these were men to whose indefatigable zeal modern philosophers were indebted for most of the foundations of their knowledge. They had left to us, as an easier task, to give new names, and arrange in connected classifications, the facts which they in a great degree had been the instruments of bringing to light. the labours of men of genius, however erroneously directed, scarcely ever fail in ultimately turning to the solid advantage of mankind.’ I listened to his statement, which were delivered without any presumption or affectation; and then added, that…”

25. In between “efface the recollection of the past” and “My abhorrence of the fiend” PBS inserted “There was always scope for fear so long as anything I loved remained alive.”

26. In between “ancient days or imaginary evils” and “but now misery has come home” PBS inserted “at least they were remote and more familiar to reason than to imagination.”

30. MWS wrote “Remember that I am thy creature—Thy Adam—or rather the fallen angel for everywhere I see bliss while I alone [sic] am irrecoverably wretched.” PBS changed to “Remember that I am your creature—I ought to be thy Adam—but I am rather the fallen angel, whom though drives from joy for no misdeed; every where I see bliss from which I alone am irrecoverably excluded.”

32. In the original draft, which was for a two volume novel, this is the chapter that opened the second volume: the Creature’s narrative of his own life.

33. MWS wrote (of the old man and his daughter) “He raised her and smiled with such kindness and love and that felt my own hard nerves move and I was obliged to withdraw from the hole.” PBS changed to “He raised her and smiled with such kindness and love the I felt sensations of a peculiar and overpowering nature; they were a mixture of pain and pleasure, such as I had never experienced either from hunger or cold, or warmth or food; and I withdrew from my station unable to bear these emotions.” In the 1818 version, “station” was replaced by “window”. Robinson notes (p. 248): PBS cancelled MWS’s phrasing, pencilled in his suggested revisions, some but not all of which MWS inked over to accept, In effect, MWS edited PBS’s prose after he edited her prose.”

34. MWS wrote “he cleared away the snow that obstructed her path to the milk house; drew water from the well and brought the wood from the outhouse” and PBS added “where, to his perpetual astonishment, he found his store always replenished by an invisible hand.”

36. Describing the Creature’s discovery of Frankenstein’s journal, MWS wrote “You doubtless recollect these papers—Here they are—Every thing is related in them & every disgusting circumstance is set in view; the minutest description is given of my odious & loathsome person.” OBS changed to: “You, doubtless, recollect those papers. Here they are, Every thing is related in them which bears reference to my accursed origin; the whole detail of that series of disgusting circumstances which produced it is set in view; the minutes description of my odious and loathsome person is given, in language which painted your own horrors and rendered mine ineffaceable.”

48. On the draft copy, PBS made no changes to the final paragraph of MWS’s manuscript, which read: “He sprung from the cabin window as he said this on to an ice raft that lay close to the vessel & pushing himself off he was carried away by the waves and I soon lost sight of him in the darkness and distance.” Subsequent to this, PBS did “embellish” (Robinson’s word, p. 252) the final pages of the manuscript, and final paragraph in the 1818 text reads “He sprung from the cabin-window, as he said this, upon the ice-raft which lay close to the vessel. He was soon borne away by the waves, and lost in darkness and stance.” It is up to the reader to think whether or not this change makes a crucial difference to our understanding of the Creature’s fate.